We used to host our LDAP server in a Fedora 23 server. For a critical server, Fedora was a really bad choice.

We were afraid to update in fear that things would break.

So last semester, I was asked to move our LDAP server to a CentOS machine and make it highly available while I am at it. High availability might seem like overkill for scale we work on. But it seemed to be an interesting problem to me so I thought, "What the hell!! Let's do it."

This post focuses solely on setting up LDAP servers in multi-master mode and moving things to it from the old server. Making things highly available will be discussed in the next post. This post also assumes that you are familiar with a bit of LDAP and its implementation, 389-ds.

We only use two servers in our setup but with some minor modifications you should be able to easily extend things for more number of servers. ldap-old refers to our old LDAP server while ldap1 and ldap2 refers to the new machines. We will be making use of 389-console as well as the command-line for this post.

Replication is used to keep the contents of two directories in sync. All types of data modifications on one directory will be mirrored at the other directory. The most common scenario is the master-slave replication where all writes are handled only by the master while reads can be dealt with either by the slave or the master. In most scenarios, master doesn't handle any reads, only the slave. Updates on the master are synced with the slave. In a multi-master setting, all the involved directories are able to perform reads as well as writes. Hence any updates on one of them will be reflected on the other.

To move forward, you will need to be aware of the following terms. This is taken from RedHat Documentation:
Smallest Replication Unit: A database is the smallest unit of replication. That means only a part of the database cant be replicated.
Replicas: A replica is a database that takes part in replication process.

Our directory only has a single suffix. Hence a replica can be assumed to be the directory itself and the replication unit is the suffix.

Suppliers and Consumers: A supplier is the server that holds the replica that is copied to the replica in a different server. This different server is then called the consumer. In a master-slave setting, the master is the supplier while slave is the consumer. In our case, the multimaster setup, both the servers are suppliers as well as consumers.
Changelog: The changelog is the record of all the modifications that happen in the server. The directory uses changelogs to synchronize the data betwen servers. It is disabled by default.
Replication Manager: The replication manager is a special entry in the directory with access directory data. The supplier binds to this entry in the consumer to send data to it. In our case, we will use the entry cn=Directory Manager
Replication Agreement: This finally defines the specifics of the replication; like the database to be replicated, the consumer server, connection security, etc. The agreement exists only between one consumer and one supplier.

Alright, enough talk. Lets jump into the nuts and bolts.

Installation. In ldap1 and ldap2 install the directory server and the admin console. Initial setup can be done by running setup-ds-admin.pl Verify that both setups are working by connecting to it from 389-console and a little traversing of the available suffixes.

For the data import to go smoothly, import any custom schema that you have used. Just drop the schema files to /etc/dirsrv/slapd-ldapX/schema/ Also edit dse.ldif on both servers to change any configuration paramenters. Common parameters that could be changed are nsslapd-auditlog-logging-enabled and nsslapd-sizelimit

Note: Stop the directory server before performing the above step. The directory may edit the dse.ldif file on its own and your changes might be lost. Similarly, new schema will appear only after the restart.

SSL is important so that all connections to the directory are encrypted. This is especially important for authentication requests where passwords are transferred. To set this up, I have used Parth Kolekar's excellent post. The commandline steps are outlined below. The aforementioned blog mentions more techniques.

To setup the certificates,

You have now imported the certificates. You now need to enable encrypted connections. This is easily done from 389-console. Enable them at, 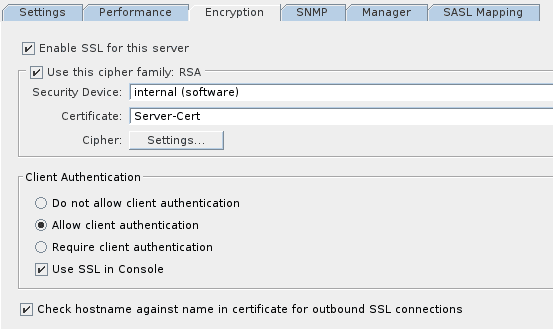 Restart server and test to see if things work smoothly.

As we mentioned before, replication requires changelogs which is disabled by default. Enable it from the 389-console by Directory Server > Configuration > Replication > Supplier Settings > Enable Changelog

Within the Replication > userRoot tab, enable replicas and enter the replica ID and the the supplier DN. Perform this for both servers and ensure that replica id is unique for each server.

Now we want both of the directories to be in sync with each other. Hence create a new replication agreement in each server, which sends data from itself to the other one. Right-Click on userRoot and use the wizard to create a new replication agreement. The wizard is pretty self explanatory. Just note that once SSL has been setup, you need to use port 636 for connections rather than port 389.

Now that both the directories are in sync, it's time we populate ldapX with data from ldap-old. To do this, simply create replication between ldap-old and one of servers in ldapX. This ensures that the data in any of the ldapX is always recent and allows us keep using ldap-old till we are sure that everything is peachy.

This should be the current replication scheme:

For testing, we want to ensure that all the requests to ldap-old now goes to one of ldapX so as to see if anything breaks. We will change the system configuration so that ldap1, in addition to its own IP will have the IP of ldap-old. We also configure ldap-old with a new temporary IP so that we can still access it. In ldap-old,

While in ldap1, do this,

Allow a few seconds for the machine to be discovered. After that ldap1 will be handling the requests.

If all goes well, nothing should break. Try logging into accounts that athenticate through your directory. Everything should work seamlessly. Now, if everything is working seamlessly, you would want that all modifications in ldap1 to be replicated back to ldap-old so that once testing should finish and you move back, data is still fresh. Similar to above, create replication from one of ldapX to ldap-old. Use the temporary IP for ladp-old. The final replicaton scheme will look like this:

Keep an eye on the error logs. There won't be any silent errors. After every step, look at /var/log/dirsrv/slapd-ldapX/errors for anything new. Replication issues can lead to some entries not being present after sync and are very difficult to find otherwise even in moderately small directories.

Once you see an issue you can drill down on it by changing the value of nsslapd-errorlog-level in dse.ldif. Refer here for find which values you would need to set.